The market for robot-assisted medical technology applications has been growing steadily for years. What began classically in surgery – the Da Vinci robot-assisted surgical system was introduced in Europe in 1999 – has already reached wide areas of medicine today. Medical devices and the robots integrated into them often come from different manufacturers. Axel Weber, Vice President Medical Robotics at KUKA, and Product Manager Katarzyna Szopinska explain in an interview how such cooperation can succeed and what medical technology providers should look for when making their selection.

What are the biggest challenges in designing and building a robot?

Katarzyna Szopinska: The biggest challenge is the complexity of the project, which requires financial and human resources. But that is not the end of it. After all, the system must be continuously maintained after development, the quality in production and service must be maintained, keyword lifecycle management. If a company that also develops the medical application has to do all this, it quickly reaches its limits – both financially and in terms of personnel. The processes require very specific know-how.

Perhaps for classification: How is KUKA positioned in medical robotics?

Axel Weber: We have a large team with different expertise. For example, engineers take care of questions of robot mechanics, they bring together the individual components of the robot. Our system testers then make sure that the system functions as it was developed. Other employees accompany the transfer of the system from development to production. Then we employ specialists for the robot control system with its many electronic components. The third component, in addition to mechanics and production, is robot programming. Here we have a corresponding team of software developers and engineers who provide the interfaces.

And that is part of the complexity you were talking about, Ms Szopinska?

K. Szopinska: Yes, on the one hand. But on the other hand, it is important to maintain the robot over its entire life cycle. That means making improvements, incorporating feedback from the users and keeping the quality in production at a high level.

A. Weber: These can be very simple things that have to be incorporated. For example, if Microsoft cancels the Windows 7 operating system, the system software has to be changed to Windows 10. This is not trivial because numerous interfaces have to be adapted, tested and released. But it is also about the management of suppliers. If a motor or a gearbox is no longer available, suitable alternatives must be found that meet the requirements of the company’s own robot. Experience has shown that it is easier for larger companies with the appropriate specialists and networks to deal with both of these issues. In the end, it’s all about reliability, not only in development and production, but also in service and support.

That really sounds like a complex undertaking. What are the other advantages for a medical technology manufacturer if he uses the robot of a specialised supplier?

A. Weber: In addition to the robot, the company always gets decades of experience and the corresponding know-how, which are reflected in a mature robot. If a medical technology supplier builds the robot for his application himself, he has to gain a lot of experience himself first.

K. Szopinska: In my opinion, there is another point. Many companies that build their own robots focus on one application. If the field of application or the business area then expands and new applications emerge, it becomes clear that the robot no longer fits. In order to move forward as quickly as possible, a new one is needed. At this point, our LBR Med offers many possibilities. It has already proven its suitability in rehabilitation, aesthetic surgery, laser-assisted and classic orthopaedic surgery, among others.

How can established robot manufacturers support small companies with the regulatory requirements?

K. Szopinska: KUKA already offers a CB report for the LBR Med, as a robot specifically for medical technology applications. This is a test report that is prepared by an accredited CB test laboratory and can serve as the basis for national certifications and approvals. Applicable requirements from the standards mentioned in the CB Report have already been taken into account in the development of the robot, the control system and the software. This considerably simplifies the approval of a medical device based on the LBR Med for our customers. A decisive part of this is the risk analysis, i.e. that we have considered the applicable risks and derived measures for them.

A. Weber: In principle, we work as if our robot were a medical device in its own right. Accordingly, we have geared our development and quality management to this. And of course that makes it easy for the customers when they can take our certificates – for example for the CB report or the test certificate according to DIN 13485 – and present them to the approval authorities. That doesn’t solve the entire problem, because the customer ultimately has to approve his entire system, but it does relieve the customer of a large burden in the approval process.

How flexible is a standard robot?

K. Szopinska: KUKA and the LBR Med are very flexible and open to cooperation with customers. We always want to make sure that the robot fits into the application in the best possible way and respond to the customer’s wishes accordingly.

A. Weber: We also have dedicated offers, such as training courses, to get to know the system with its diverse capabilities and to be able to use it in the best possible way. If it then turns out that the customer still needs additional functionalities, interfaces or connections, we have our own development team that develops these functionalities together with the customer.

Let’s assume that a company wants to build a medical device and is looking for a robot. What should it look for?

A. Weber: First of all, all technical requirements must be met. There are questions about the necessary payload and reach, the weight of the robot, the number of degrees of freedom and the guidance system. Equally important are the regulatory requirements. If there is no CB certificate, this is an even more complex process that requires a great deal of expertise on the part of the manufacturer.

Thirdly, he should pay attention to the experience and development capacities at the robot supplier as well as critically evaluate the stability and future viability. Finally, the integration of a robot into a medical device means a high personnel, regulatory and financial effort. It should be ensured that the robot is available for a long time.

Medical robots are more cost-intensive to purchase than an industrial robot, because very specific processes and documentation are behind them. Why does it still pay off for a medical technology manufacturer to use a special medical robot?

K. Szopinska: We have already described all the challenges involved in the construction and production of a robot. It is also too short-sighted to look at the costs of the individual robot. Rather, the follow-up costs in the entire life cycle, such as quality assurance and change management, must be taken into account. Most important, however, is the easier approval as a medical device. This saves the providers an enormous amount of time and money. And so the acquisition of a medical robot pays off quite quickly.

KUKA is a leading supplier of robotic components for medical devices. It is the only global robotics company with an entire business unit dedicated to medical robotics. With more than two decades of experience in medical robotics, our team offers services in development, sales, quality assurance and support, combining expertise in robotics and medical technology. 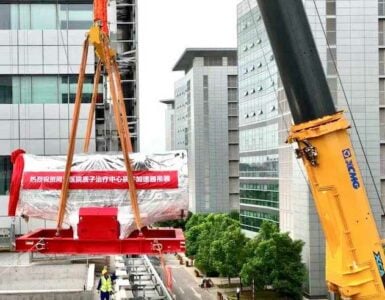