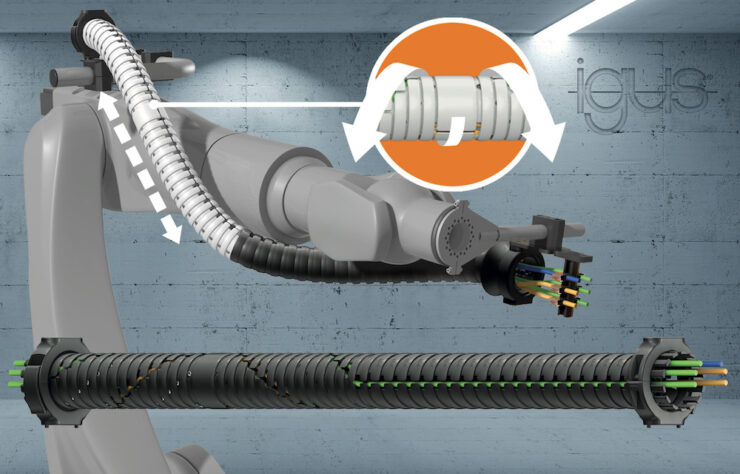 A telescopic triflex® TRX energy chain for robots from igus saves space and provides a withdrawal path of up to 40 per cent less.

Robots can be limited in their range of movement by the cable retraction system. To allow cables in industrial robots to move safely, easily and compactly, igus has developed the four-dimensional energy chain triflex TRX. The new design replaces the classic robot hose package and retraction system. It uses a unique telescopic mechanism inside the chain that allows a retraction of 40% of the length. This allows users to save space on the third axis of their robot, and is cheaper and can weigh more than 80 per cent less than a retraction system.

The three-dimensional triflex R e-chains from igus are widely used in industry when it comes to protecting lines and hoses on the robot fail-safe. In order to prevent loops that could hinder the robot during the movement of the energy chain system, withdrawal systems on the third axis are normally used. “However, the axes to the robot offer less and less space, so a new solution had to be found,” says John Slater, Product manager of triflex® energy chain at igus UK. The triflex TRX system was developed from the triflex R energy chain, a four-dimensional energy chain in which the retraction system is integrated. “With TRX, we create a space-saving chain that can be fixed directly and compactly on the third axis,” says Slater. “The energy flow is torting into itself, lengthening and shortening spirally in a telescopic action by up to 40 per cent”.

For this purpose, igus relies on the unique mechanism of a screw connector system as well as an integrated reset belt. The belt repeatedly brings the chain links to their starting point, whereby the retraction force is adjustable. The cables are inserted in the form of a coil inside the chain and guided safely by the chain. In addition, the cables and hoses are attached in the middle of the TRX so as to remain in a good position when pulling on the chain.

The TRX e-chain is up to 83 per cent lighter and takes up less than half the space of other retraction systems, further improving the performance of the robot. And costs are significantly reduced by the absence of an additional withdrawal system. TRX can be easily connected to existing triflex® R e-chains of the TRE series. As with triflex® R, cables can be quickly filled into the energy chain from the outside. The new TRX system was presented at igus’s newly launched real-virtual trade fair that ran from 5 May 2021.